An Old Article Not Up to Date and No One Needs

As of January 21st, Flash is dead. I made my career creating Flash (and Director!) interactions. I remember in Spring semester of 1998 staying up through the night to learn how to mimic the look of GaboCorp's all Flash site.

Fast forward ten years and I had moved from agency work to being an internal designer at Black \& Decker. I was generating dozens and dozens of instructional videos that got placed in online learning courses for the sales force. I was deep into learning AppleScript to automate different parts of work flows (mostly resizing graphics, converting audio, etc) and wondered if I could drop the videos I was making in Final Cut Pro and Compressor into a script that would convert to (at the time) standard FLV files. I finally found a solution using the traditionally Linux-based tool FFmpeg, it's OSX shareware-version, and some AppleScript shell scripts. I wrote what I came up with at Using Applescript and FFmpeg (through ffmpegX) to create Flash Video Files (FLV).

This became the highest trafficked page on my site. In some re-vamp of gregwalsh.com, I must have deleted it. I was rebuilding my blog engine and happened to find it in an archive. Even though Flash and FLVs aren't that important anymore, I thought it was important to keep it posted. You never know if some unfortunate socio-technical history PhD student will need to make something like this happen.

One of my Favorite Examples of Kid-Centric Design 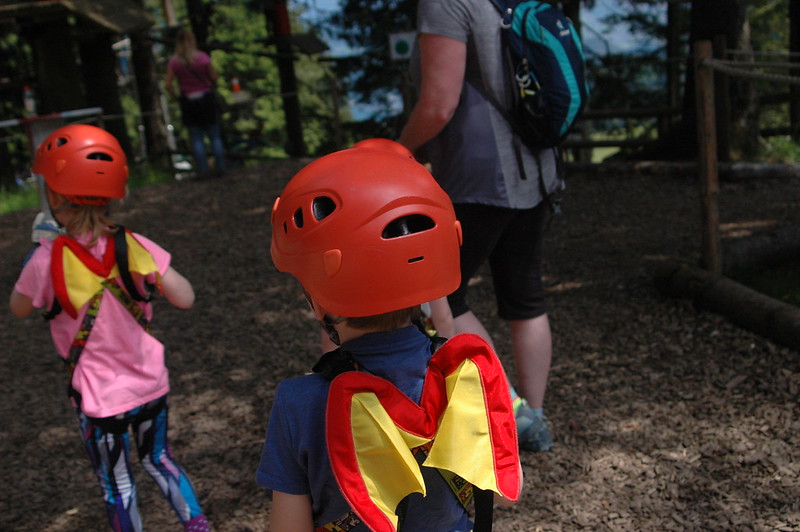 This set of wings is really a harness for outdoor adventure. I really like this example of design because it not only functions, but, it makes the target audience (children) interested in what it does (safety). Kids want to wear it because it is cool.

One of the most frustrating things as a researcher is keeping all of my sources and references organized. Fortunately, I've been using the BibTex format for some time and have minimized loosing sources once I have them. One of my colleagues at UMD posted this:

Each paper is a page (to collate \[\[context\]\]), and I identify "micropublications" (findings/claims that are contextualized) as blocks within these paper pages, then blockref them into outlines/notes where I synthesize ideas. Ex screenshot: pic.twitter.com/b7K2LdhZiD

The program that he is discusisng is called Roam and it is a tool for organizing your research. I looked into it and the \$15 month price seemed a bit high for not knowing if I would like it.

Based on the screenshots, it looks a lot like a wiki with a graph database. I thought the best idea might be to start with just a personal wiki that I could use locally on my machine. That proved to be difficult because wikis are technically multiuser and a single user environment doesn't count as a wiki. In fact, multiple sources tried to send me to tools like Evernote and OneNote. (To be honest, I would use Notes on the Mac/iPad except that you can't interlink notes.)

I eventually found Dokuwiki and TiddlyWiki. Dokuwiki looked like it required a web install and I wasn't up for that. TiddlyWiki looked really nice and besides a few hoops to jump through to save, is very easy to set up. In fact, I found a really nice tutorial on setting TiddlyWiki up like Roam.

This is my first attempt at publishing on Medium.com. I'm not sure if this will work or even if I want it to work.

Getting Scammed by a Startup

Reading Penny Kim's Article I Got Scammed By A Silicon Valley Startup today on medium, I was reminded of my own experience with 'Startup' culture and the business death spiral.

First of all, I've wrote about this 11 years ago. It was a pretty terrible experience that was definitely similar to Kim's experience with an unknown statup.

Between July 21 and Aug 8 we would be told, every day, that our paychecks were coming. The first few days we were told that physical checks were on UPS trucks. They never came. Days after that we were told that the UPS checks were cancelled because they must be lost and Michael would be personally wiring each of us the money. He asked us to write down our bank accounts and routing numbers. Every day, he would be at the bank moving assets around, wiring funds and promising delivery dates that never came.

I remember this situation vividly in several companies I worked out. The first one had massive cashflow problems because the owner of the company was 19 (yes, I was so hip, I worked for a teenager) and had no idea how to spec or manage projects once seed funding ran out. We were told every day that we would be paid soon. I had just bought a house - thank you sub prime mortgages - and had a car payment. I made the mortgage payments but the car payment became late and I was awoken everyday by the lease company to see if they were getting paid. I never got my last $2k of money and, honestly, I've come to understand how things got there and harbor no ill will. The money was well worth the lessons I got from the experience. Unfortunately, those lessons really weren't parsed until after my next job.

When the first company ran out of money, I was persuaded by the owner of a company we were sub-contracting to come work for him. He had heard we were having money problems and promised me a raise and an awesome title - technology guru. He also told me in no uncertain terms that he was ready to become a silent partner and wanted me to take over the company. He appreciated my age (26) and experience and thought I would make a good replacement...he trusted me to take over his baby. Having had respected this company for years in Baltimore, I was easily flattered into working there. Of course, the promise of being paid didn't hurt either. After several months of being there, he hired a business development person and gave him the same story about turning the company over to him. It was harsh, but, I was still making games for big clients and we were subbing to National Geographic. I also got to build an interactive for the Smithsonian that was up for over ten years. These were the kinds of things I liked to do and it was fine. One thing I never paid too much attention to was the fact that we never had Direct Deposit and instead received checks on Friday afternoons after 5...conveniently after the bank it was drawn on was closed. I would always go to my bank's ATM and deposit the check.

One week, I had wanted the money in hand for something and I found a branch of the bank open late and went to cash the check. The teller had to call the manager over and he told me that he would cash the check but I needed to tell my company that they needed to have money in the bank if they were writing checks. My ~$1000 check bounced. The company had no money in the bank. This became a regular thing until payday switched to Mondays (if that). Much like the article, we would be relieved and giddy when we did get paid. I heard later that the insurance premiums weren't being paid and my co-workers were having medical bill issues. Not long after all of this, the company was 'sold' to a guy with a company in DC. It was a tech company and I felt like my skills were redundant with what he had lined up. My instints were right and two of us had our hours and pay slashed. He told us that meant we couldn't file for unemployment because he wasn't letting us go. A few days later, I quit in what I had hoped would be remembered as a Jerry Maguire-like moment but was probably more like Chunk in Goonies. All I really wanted was my Aeron chair as severance and didn't get it. What I did get was a final check written on the new owner's mom's checkbook. So that happened.

All of this can make you think that most startups are terrible. I'm not so sure. During all of my troubles, the owners of R2i (a start up themselves who shared space with us) went out of their way to help me out. In fact, the side work they got me is what got me through that rough patch. Their interest in me as a professional is more indicative of the Baltimore startup culture that I hear about. I just happen to walk into two bad ones right after another.

Full Article: I Got Scammed By A Silicon Valley Startup

3D printing is pretty common at the Digital Whimsy Lab. I've always wanted to have one at home if for no other reason than to just mess around. I found the Jakks Pacific 3D Character Creator at Target for $11.99 (down from ~$40) and thought it would be fun. The product is a hot wax mold injector that works with a plastic skeleton system. You place the skeleton pieces in the mold, place the mold on the melter and then inject the hot wax into the mold. After it cools, you pop it open and have a tiny action figure. 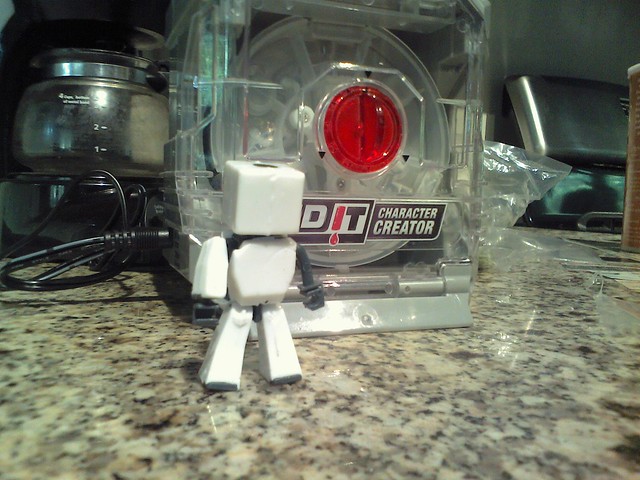 We had a few problems. First, the device is pre-loaded with a wax stick that doesn't inject unless you place another one inside. Next, it takes about 10 minutes to heat up and 20 minutes to cool down. That means each figure takes about 30 minutes to make. I'm not sure if you've hung out with a 4 and 7 year old, but, 60 minutes for two figures is too long. Second, it never made the other figure. Something got jammed up and it just didn't work.

I like the idea of a wax mold toy for kids. I think it scratches the creative maker itch without the expense and problems of a real 3D printer. Based on the price, I'm guessing this product is being phased out, but, I do look forward to what could be next in this market.

Thanks to a recent sale at Walmart, my family is now the proud owner of all the Star Wars Disney Infinity Figures. I know what you're thinking, "Wow, congrats... that is a big accomplishment!" Ok, you may not be thinking that but Disney Infinity was the best video game system on the market.

Why do I keep referring to it as a system? Because it was really an Operating System for video game hardware. Sure, you could buy it for the PlayStations, the XBoxes, and Wii family of systems but it was a uniform experience across all of them. Each version of Infinity allowed for playets which were small self contained games that keep my young kids (and me) entertained. With the release of Disney Infinity 3, the developers released other kinds of games that use the characters in new ways (fighting, racing) and really extended what the game could do. In fact, we haven't taken out the Infinity Game discs since they first came out. This game OS has been all we've needed for video game fun.

It really is a shame that the series has been cancelled. Our family has found it fun and the level programming interface has been a really great intro for my oldest. I understand that yearly releases were unsustainable but I hope a third party comes along and licenses the IP and make compatible games in the future.